Puma’s marriage of sport and fashion through their high-quality footwear, apparel, and accessories makes them one of the world’s leaders in sport lifestyle.

The official Puma online store sells the world’s largest selection of Puma shoes, clothing, accessories, and equipment. These products typically fall into one of two categories: (1) sports performance and lifestyle, and (2) sports fashion.

Puma’s performance label includes categories such as soccer, running, motorsport, and more. Their fashion line, on the other hand, features collaboration with renowned designers such as Alexander McQueen, Sergio Rossi, and many others.

This case study aims to show how a targeted optimization experiment was able to impact revenue, even during testing (a unique advantage to using HiConversion).

The goal of Puma’s optimization program was to produce a sustainable lift in RPV (revenue per visitor).

The purpose of the optimization experiment was to maximize Puma’s revenue per visitor in the checkout funnel. The results were extremely positive – after about 2 months of adaptive optimization testing, Puma generated a directly measurable revenue lift of $904,330.

“Running multivariate optimization campaigns on your site can be a time-consuming and costly challenge. HiConversion made the optimization campaign significantly easier to execute, and we saw improved overall results in both customer experience and top-line sales” – Chris Hardisty, Head of eCommerce, Puma US

HiConversion’s actionable analytics provided precise feedback on the impact of each change applied to Puma’s site. This type of reporting empowers eCommerce teams to make confident, data-driven decisions much faster.

The scope of the optimization campaign included the multivariate optimization of Puma US’s checkout funnel. HiConversion designed and provisioned multivariate changes that spanned across several pages. This approach ensured end-to-end results and a consistent user experience.

The Results: Increased Revenue Per Visitor

HiConversion treated 207,251 visitors and recorded 46,275 sales over a two-month period. As a whole, the campaign provided a 21.66% RPV lift, translating into $904,330 in new revenue. The list of top combinations of tests included several treatments that performed over 30% better than the baseline – this is an indicator of future potential but not a result recommended to be implemented right away.

The following report illustrates new revenue produced by the optimization campaign alone, in addition to the revenue that was being generated by the baseline.

The report below shows many combinations with an RPV lift that is more significant than the overall lift of 21%, highlighting the potential for additional site improvements. 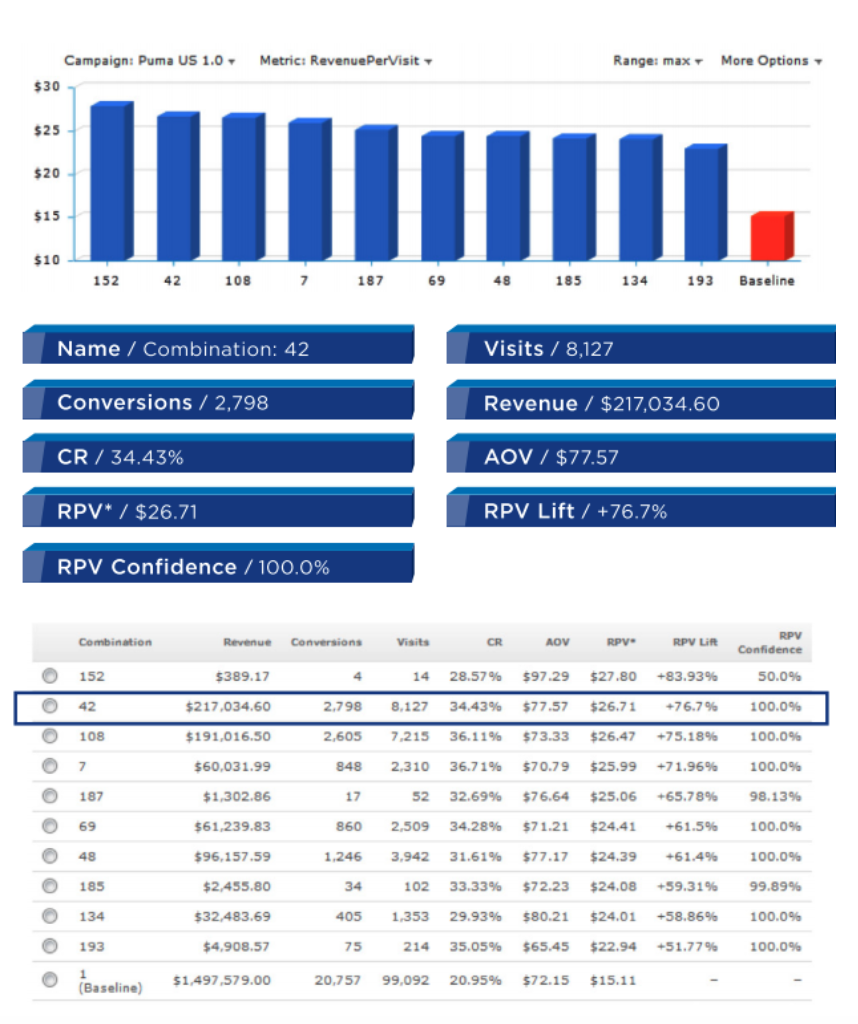 Even through a single round of testing – focused on Checkout UX – Puma was able to see immediate impact of optimization. Strategically, their team learned there is no version of a web page that will perform the best at all times. This is because the behavior of visitors (both new and returning) are hard to predict, despite what popular marketing segmentation and demographics might have us believe. While historic data how people buy online can inform future forecasting, it is no substitute for how people actually behave – which is affected by dozens of ever changing external factors.

In order to build consistent revenue growth, eCommerce professionals need to use be capable of adapting to changes in visitor preferences in the moment.