UNIQUE INSIGHT: What works well before the holidays, may in fact, not perform well during the holiday season or vice versa. In today’s experience economy, the only sustainable solution is to continually optimize by leveraging adaptive optimization technology.

Timex was established in 1854 as the Waterbury Clock Company. At the time it turned a 300-year-old industry upside down. They stamped gears out of metal, instead of carving them from wood. They made smaller, more accurate movements faster than ever before. In fact, even Detroit’s automakers were inspired by their assembly lines when the automobile became a thing.

Timex Milan-based design director Giorgio Galli knows what makes Timex tick better than anything else. Every Timex starts with a careful consideration of company legacy and a passion to blaze forward. In 2019, Timex asked Giorgio to create a watch that brings to life everything Timex stands for — in other words, to create the most “Timex” Timex ever made. He answered with the S1 Automatic.

Watchmaking is back in the USA. S1 is drop forged in US-sourced stainless steel by auto parts manufacturers, and assembled in their Connecticut Headquarters with a high-quality Swiss movement. What started as an impossible idea is now a Timex watch made in America. Conventional wisdom among eCommerce companies is to run A/B or multivariate tests during the regular shopping season to optimize online customer experiences.

They then freeze the code and do not actively experiment during the holidays. Companies fear that the risks associated with trying new ideas during the high revenue season will outweigh the benefits.

Since they were freezing the code and stopping live experiments during the holidays, Timex was essentially ‘turning off the lights’, preventing them from getting a handle on shopping and buying patterns during peak holiday season. They suspected that visitor behavior and preferences during the holidays were different but they could not measure it.

Obviyo’s growth marketing platform provides a fully integrated data platform, personalization, and experience optimization capabilities. In this case, the Timex team was using the data platform and adaptive optimization features of the solution. Used together, they enable large scale experimentation with many A/B tests running in parallel, powered by adaptive algorithms and deep data insights.

The image below shows a few A/B treatments that ran during the holiday season. 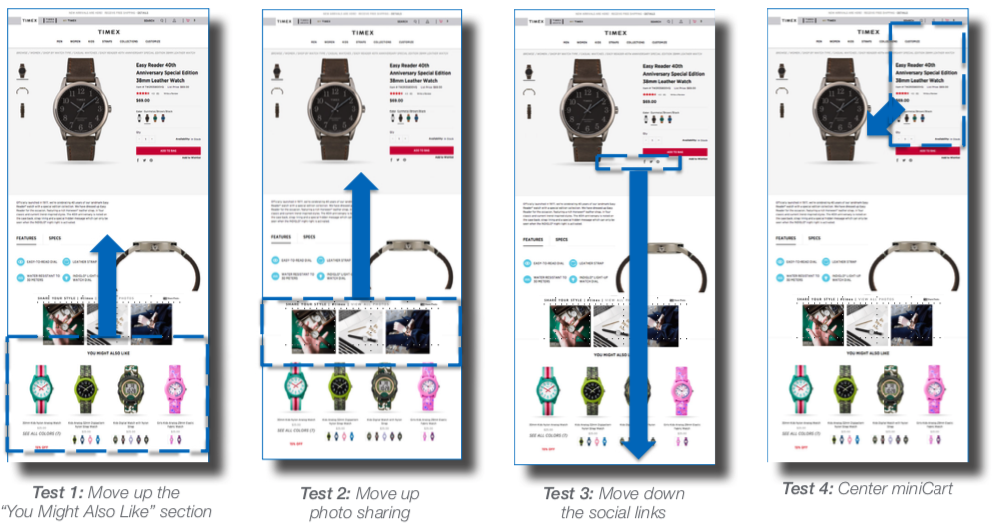 All were simple changes introduced to experiment with the existing page elements:

Looking at the results below one would conclude that all treatments were positive and that the conversion rate optimization campaign performed very well. Let’s examine shopping behavior before, during and after the holiday season.

Treatments included in this study were not performing well:

Note: although the treatments were negative, there was a minimal negative impact on sales because adaptive algorithms were allocating a minimum of traffic to underperforming treatments;

In today’s experience economy, the only sustainable solution is to continually optimize using adaptive optimization technology.

With Obviyo’s growth marketing platform Timex is able to continually optimize every aspect of the customer buying experience.

As a result, they’re significantly increasing conversion rates and revenue-per-visit (RPV) while empowering their business teams to experiment and continually innovate.

“We consider the ability to continually engage with customers and learn from their reactions to be our strategic competitive advantage.”